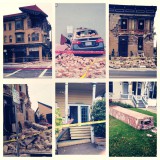 Thursday, January 15, 2015, Napa, CA – Napa Valley Community Foundation (NVCF) announced today that local residents have until March 31, 2015 to apply to the Napa Valley Community Disaster Relief Fund (the Fund) for grants to help repair structural damage to homes, as well as physical and economic losses to small businesses, stemming from the August 24, 2014 South Napa Earthquake.  The prior deadline for these rebuilding programs had been January 16.

To be eligible for a grant, homeowners and business owners must demonstrate that they have been declined for a Small Business Administration disaster loan, or have losses that exceed their approved SBA loan amounts.  Those who have already received rebuilding grants from the Fund may apply for additional support based on the new maximum grant amounts.  Small business owners who were declined for disaster loans from private lenders, such as local banks, or who have losses which exceed approved loan amounts from private lenders, may also apply for grants from the Fund.

Terence Mulligan, President of Napa Valley Community Foundation, says extending the application deadline and increasing the size of available grants makes sense, in light of the needs which have already been addressed by federal government disaster aid dollars.  “The good news is that FEMA and the SBA were able to help thousands in our community, with grants and approved loans of almost $40 million in the hands of more than 4,300 applicants as of this week,” he said.  “We continue to focus on helping those that fall through the cracks of government funding, like the 325 homeowners and business owners that have been declined for an SBA disaster loan so far.”

To date, NVCF’s nonprofit partners have received applications from 208 homeowners and business owners seeking assistance with rebuilding, and grants have been awarded to 77 recipients.  Another 128 applications are pending.  In total, $2.5 million has been distributed from the Fund: $2 million in September and October to address immediate recovery needs, and $500,000 thus far to help homeowners, mobile homeowners and business owners rebuild.   Overall, nearly 1,000 Napa County households have received direct financial assistance for recovery or rebuilding, and more than 11,000 local residents have received services as a result of grants from the Fund. In late November, NVCF allocated up to $8 million from the Fund for rebuilding programs, including programs for homeowners, mobile home owners and small business owners.

Mulligan said that the approval rate for SBA disaster loans in Napa County has been dramatically higher than in other parts of the country (70% for Napa County versus 50% nationwide).  “We’re fortunate to see fewer residents than we would have expected slipping through the safety net of the government’s disaster relief programs.  However, we want to provide assistance to those still in need, and that’s why we’ve extended the deadline and revised the requirements.”

The Napa Valley Community Disaster Relief Fund also is planning a third phase of work that will focus on resiliency, with a goal of ensuring that Napa County is better prepared for the next declared natural disaster, man-made disaster or public health emergency. This piece of the program will be announced after the current phase ends on March 31.

In September and October, the Fund made its first round of distributions, which focused on emergency needs.  During Phase I, the Fund granted $2 million to 20 nonprofit partners to support local residents:

Homeowners and business owners who have been declined for a Small Business Administration disaster loan, or have losses which exceed their approved SBA loan amounts, can apply for a grant from the Napa Valley Community Disaster Relief Fund by visiting: https://www.napavalleycf.org/apply/ on or before March 31.

What is a Community Foundation?

We know you might not know, and that’s ok.
Click the “learn more” link to tuck into the details.

APPLY FOR A SCHOLARSHIP     Stay Informed! Get our Monthly Email